Can Peter Sue The Bachelorette for Breach of Contract? 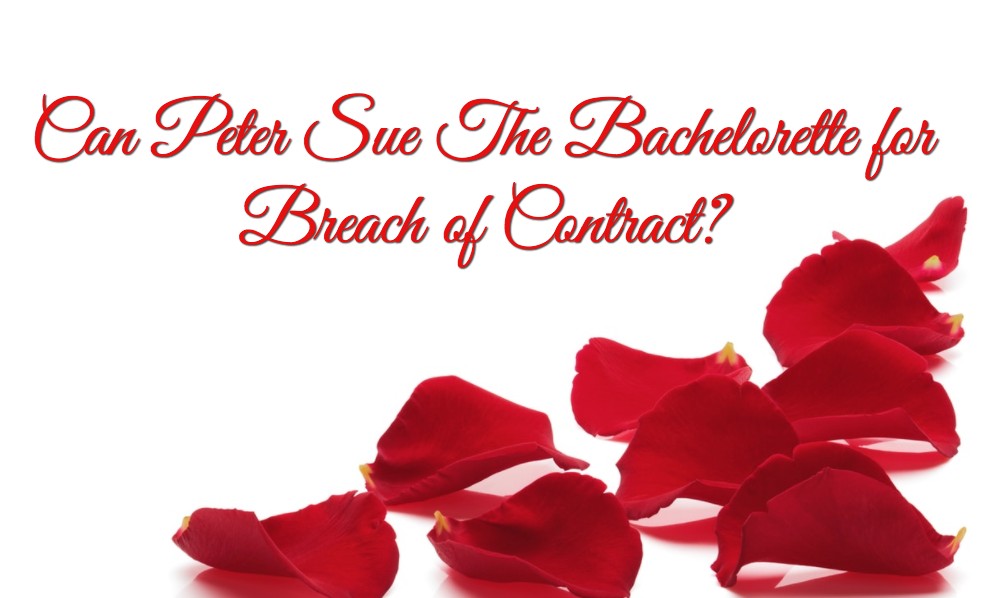 08 Aug Can Peter Sue The Bachelorette for Breach of Contract?

Whether you watch The Bachelorette or don’t, chances are you’ve come across The Finale on social media this week. If you haven’t already, you will at some point soon. It is a show built around the premise of one woman looking for true love in a group of eligible bachelors that are looking for the same. The current season just ended with the Finale of the show airing earlier this week. Now, for some this show is straight forward: girl meets guys, girl chooses guy, girl and guy live happily ever. But from the perspective of a lawyer, The Finale raises more than a few questions that surely were not the intent of the show’s writers. For example, one might catch themselves wondering: can the runner-up sue The Bachelorette?

Now, to provide some context, The Finale shows the two finalists from which the bachelorette herself will choose one to become engaged to. This season, the she was an established lawyer herself with a successful legal practice. This season was no different, as The Finale showed Peter (the guy that the show’s fans seemed to put as their first choice) coming in second to the next guy. This means that Peter walked away without a fiancée while the next guy walked away with a wedding to plan. So, the question remains: can Peter, who spent all this time courting the bachelorette, sue the show for a breach of contract? Well, the short answer is most certainly not…but the short answer is never fun – so let’s look at the theoretical answer:

But, we can be all but sure this isn’t the case, and the contract drafted by the network are air-tight and state-of-the-practice. We apologize, Peter, if we got your hopes up – but keep in mind, you should not consider any of this as legal advice and should always consult your own attorney for legal matters (preferably not the bachelorette herself – we’re sure she’s a great attorney, but that might be a huge conflict of interest).